END_OF_DOCUMENT_TOKEN_TO_BE_REPLACED

Once again, here’s a short piece about The Sea And Cake’s song “Crossing Line,” from its new album Everybody, for NPR’s Song of the Day. Read the essay and listen to the song here.

END_OF_DOCUMENT_TOKEN_TO_BE_REPLACED

Here’s a piece about The Broken West’s “Hale Sunrise,” from its album I Can’t Go On, I’ll Go On for NPR’s Song of the Day. Check it out and listen here.

END_OF_DOCUMENT_TOKEN_TO_BE_REPLACED

Here’s a short thing on “Pastora Divine” — a song by a local hometown musician from Lawrence, Kansas, White Flight, for NPR’s Song of the Day. Read the piece and listen to the song.

END_OF_DOCUMENT_TOKEN_TO_BE_REPLACED 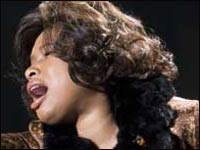 Here’s a piece on Swan Lake’s song “Widows Walk” from its album Beast Moans for NPR’s Song of the Day. Read the piece and hear the song here.

END_OF_DOCUMENT_TOKEN_TO_BE_REPLACED

Yet another featurette on NPR’s Five for Friday You can check it out HERE.

Nothing Syrupy About This Pancake Mountain

Okay, so there’s this goat puppet named Rufus Leaking. (Get it, get it?… Sigh.) And he gets to hang with George “One Nation Under a Groove” Clinton, the Flaming Lips and even the seemingly angry musician Henry Rollins. And then there’s Captain Perfect, a cape-wearing sidekick who does not live up to his name. If this sounds like a flashback to the nutty world of Syd and Marty Croft, you’re not far off. Enter Pancake Mountain, an offbeat variety show that has both kids and parents alike tuning in to watch the mayhem.

The Washington D.C.-based cable-access program is the brainchild of filmmaker Scott Stuckey and a small group of friends who serve as the show’s actors, designers, writers, artists and puppets. Stuckey created the show to combat what he describes as “dumbed down” children’s TV programming. “Dumbed down” it is not, as can be seen on the new DVD set, fourth in a series.

Pulling its name from the theme song by a D.C. indie rocker, Pancake Mountain has grown into something of an institution, both for its oddball sketch comedy (Miss Manners teaches the art of sloppy eating) and as a place for musicians to reach a much younger audience — like ages three to ten. Each episode is framed around a dance party: a rock sock hop for tots featuring a who’s who from nonmainstream music scene, including Nebraska’s singer-songwriter Bright Eyes and Metric’s Emily Haines.

A highlight of the DVD is actress Juliette Lewis, who doesn’t always seem to be in on the joke. “Do actors make good musicians?” Rufus awkwardly asks Lewis, who fancies herself a singer. “Before you answer,” he adds, “let me say two words: Corey Feldman.”

Here’s a short piece on Annuals’ song “Brother” from the band’s album Be He Me for NPR’s Song of the Day. Read the piece here.

END_OF_DOCUMENT_TOKEN_TO_BE_REPLACED

Yet another Five For Friday feature went up today.Â  Take a look. 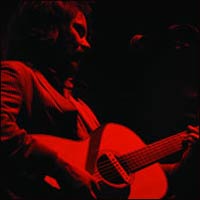 As the finger-plucked opening notes trickle in, a foggy montage of rainy highways, old storefronts and empty concert halls captures the behind-the-scenes feel of a tour. A rumble of the crowd and a lone fan declares, “Hey Jeff! I love you man!”

It’s these little moments that make Wilco frontman Jeff Tweedy’s new concert film, Sunken Treasure, so engaging — you feel as if you’re on the road with this guitar-playing icon of alt-country. At one point, he even forgets the words to “Shot in the Arm,” then asks the audience to sing along to boost his memory.

Longtime Wilco fans will know most of the music, but both newcomers and diehards get a glimpse at a different side to Tweedy’s prolific songcraft. The stripped down arrangements revitalize old favorites like “In a Future Age” and “Airline To Heaven” and show off Tweedy’s haunted yet charismatic voice. You could argue that watching from home is a far cry from experiencing this great show in person. But this DVD beautifully takes you there — and you don’t have to fight your way out of the parking lot when it’s over.

Michael Katzif, who writes about music for NPR, turned his baby boomer Dad on to Wilco.

A new feature on NPR.org debuted today: Five For Friday. It will serve as a preview of many new things deserving of some attention in the world of books, DVDs, video games, movies, music and so on and on. While not as review-ish as other outlets, it’s a quick read of things that might keep you occupied over a long weekend. You know, for KIDS! I have a short review of Medeski Scofield Martin & Wood… check it out here.

Four Jazz Names Are More Fun Than One by Michael Katzif

While your friends are listening to pop’s one-name wonders — new CDs by the likes of Diddy and JoJo — try one-upping them. Or make that four-upping them. Medeski, Scofield, Martin and Wood have crafted one of the year’s finer (and most fun) jazz records.

The names belong to jazz guitarist John Scofield and the organ-bass-drums trio of Medeski Martin & Wood (John, Billy & Chris, respectively). Regrouping for the first time since 1997’s groove-heavy A Go Go, they recapture their classic chemistry with plenty of new twists. Out Louder recalls the gritty swamp soul-jazz of late ’60s Blue Note records. But Scofield’s nasty angular guitar work, the band’s slinky rhythms and Medeski’s haunting Hammond B3 and Wurlitzer keyboards push the group into more experimental territory. Jazz novices, do not be afraid. The record never becomes unlistenable. Call it avant garage-jazz, and enjoy it. One standout: a great New Orleans shuffle reinterpretation of Peter Tosh’s “Legalize It.”

The collective is touring this fall: check out their Web sites mmw.net and johnscofield.com.

Michael Katzif is the keeper of all things podcast at NPR. A guitarist, he frequently plays his own version of garage jazz, or would if he still had a garage.