When Danger Mouse brilliantly combined Jay-Z’s Black Album with the Beatles’ White Album, it re-opened our eyes in a way to the new artistic possibilities of remixing. And while the phenomenon of the studio ‘mash-up’ did not start with The Grey Album, it certainly brought it to the forefront of mainstream consciousness.

Now The Beatles are the focus of yet another mash up– Love. Instead of getting mixed with hip hop however, they are being remixed with themselves. It is easy to be skeptical when we hear of a project like this due to the constant barrage of Beatles product year in and year out. Is this just another release in same the vein as Star Wars remasters and posthumous Tupac albums? 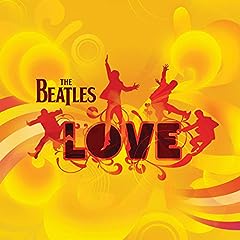 Well, yes. But, no. You see, the mastermind behind Love is THE Sir George Martin, the genius behind nearly every Beatles album. With assistance from his son, they have created a deconstruction and extrapolation of the Beatles catalog, mashing up and splicing songs within songs. The Martins reconfigure, remix, and reference songs in a way that is unfamiliar, but simultaneously recognizeable.

Case in point: “Get Back” opens with the opening chime of “A Hard Day’s Night” before laying down the drum solo from “The End.” It then crescendos to a cacophonic string collage lifted from the climax of “A Day in the Life” before giving way to the actual “Get Back” song. Within the song though you will also hear tidbits of guitar solo from “The End.”

The tune then seamlessly segues to a middle section of “Glass Onion.” Much in the same way the original “Glass Onion” lyrically references past songs “I am the Walrus” and “Fixing A Hole,” this version alludes to “Hello Goodbye’s” background vocals and horn parts from “Penny Lane” before sliding once again into “Elenor Rigby\ Julia” which borrows ambiance from “Revolution 9.”

There are so many similarly great moments on Love that it would be interesting to spend some time with this record and analyze all the sounds and allusions from song to song. The Martins have lovingly crafted an album of Beatles songs encoded with secrets you cannot help but crack a smile when deciphered.