Here’s a piece on Charlotte Gainsbourg’s song “The Operation” from her album 5:55 for NPR’s Song of the Day. Go here to listen to the song.

Lamenting a Love That Gets Under the Skin

‘The Operation’ by Charlotte Gainsbourg from 5:55 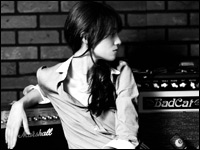 As the daughter of French pop artists Serge Gainsbourg and Jane Birken, it comes as no surprise that French actress Charlotte Gainsbourg would one day establish herself as an accomplished singer in her own right. Emulating her father’s breathy voice and double-entendre-laden subject matter, Gainsbourg crafts a mature exploration of ethereal pop and new wave. With music by the electronic duo Air, lyrics by Pulp’s Jarvis Cocker and The Divine Comedy’s Neil Hannon, and production by Nigel Godrich, 5:55 teems with densely layered atmosphere.

The influences of Air and Godrich are easy to distinguish in “The Operation,” which adds a metronomic drive of analog drum machine to the simmer of synth pads and intertwining guitar and piano. Gainesbourg, most recently seen in Michel Gondry’s The Science of Sleep, infuses the song with qualities of Gondry’s sad, surrealist love story. Singing, “Our love goes under the knife / The heart was rejected by the host,” she paints a striking image of love physically getting under her skin. The mood of “The Operation” may be dark, but it’s also hauntingly beautiful, with orchestral textures that complement Gainsbourg’s lovely vocal flourishes.

3 thoughts on “NPR Song Of The Day: Charlotte Gainsbourg, ‘The Operation’”