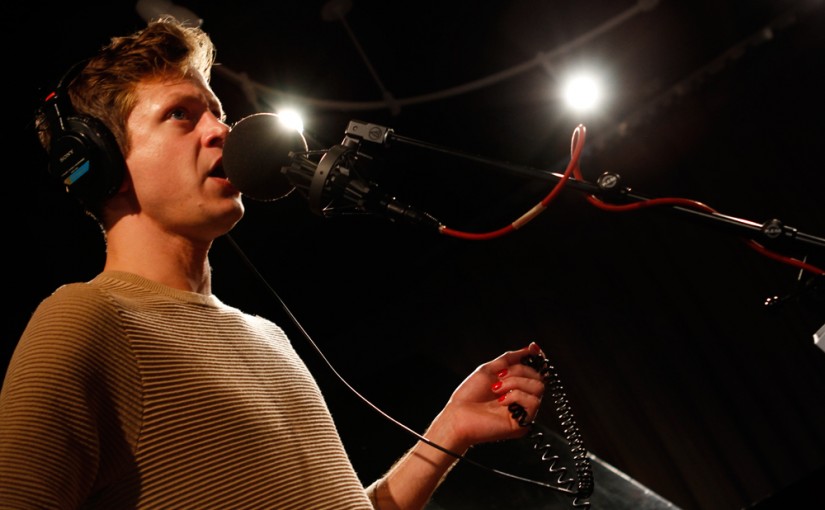 We had Perfume Genius in the Soundcheck studio, performing songs from his wonderful album Too Bright, so here’s some photos from the session.

On his previous two records, Mike Hadreas, the Seattle art pop songwriter behind Perfume Genius, wrote songs defined by their simplicity: The piano-driven musical arrangements are spare; the melodies restrained, yet memorable. And while his lyrics are concisely crafted, Hadreas reveals tiny but uncompromising details — especially as he sings about his pain and the disaffection felt as both a gay man and a sufferer of Crohn’s disease — which make his songs evocative and emotionally moving.

Now with his third album, Too Bright, Perfume Genius maintains his economical and stirring songcraft, but the music begins to unfurl, both sonically and thematically. On the standout, “Queen,” Hadreas practically oozes with sarcasm and contempt amid glittery yet sinister glam rock synths. Hadreas says the song is meant to be a defiant, empowering response to those who make him a target of ridicule and hate while walking down the streets. “No family is safe when I sashay,” he sings. It’s a potent line that demonstrates the remarkable lyrical and musical confidence found all throughout Too Bright, an album that marks Perfume Genius’ well-deserved breakthrough.