Bassist Ben Allison is one of jazz’s best “glue guys,” a versatile musician’s musician whose presence in the liner notes enlivens practically anyone’s recording. But it’s as a composer and bandleader where his idiosyncratic musicianship truly shines. Allison has been banging around a good while at this point, with a resume that includes numerous awards (seven SESAC Performance Awards) and notable citations in places like DownBeat Magazine‘s Readers and Critic’s poll. (He even composed the theme for WNYC’s program On The Media.)

END_OF_DOCUMENT_TOKEN_TO_BE_REPLACED 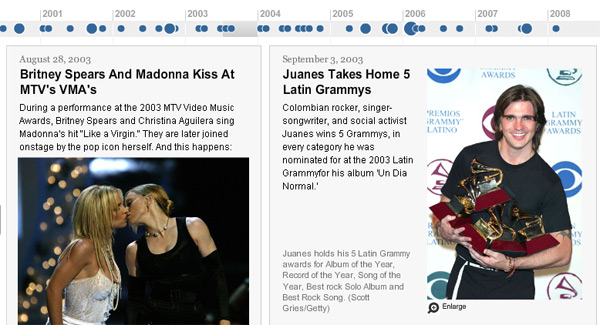 Last week we at NPR Music launched a two-week long jaunt looking into the decade in music from 2000-2009. Focused primarily on Carrie Brownstein’s awesome blog Monitor Mix, we delve into all sorts of topics regarding the most important news events, recording industry and business issues, technology changes, the relevancy of labels, big overarching trends and most important recordings of the decade…oh yeah and ‘American Idol.’ Plus so much more, it’s definitely worth checking out.

Here are a few of my own personal contributions:

— All Songs Considered: The Decade’s 50 Most Important Recordings (Here I write about TV On The Radio, The Flaming Lips and Animal Collective.)

— Monitor Mix: The Decade In Music Timeline: What Did We Miss?

— A Blog Supreme: The Decade In Review: Jazz And The Mash-Up (In which I considered Norah Jones, Ornette Coleman and Floratone — among others — as helping define the decade in jazz.)

Had a couple new things go up on the NPR blogs in the last week or two, but thought I’d continue to share them here as well.

Last week, I interviewed the filmmakers behind a fantastic new jazz documentary Icons Among Us. In part one, I talked with one of the co-directors Michael Rivoira for NPR’s jazz blog, A Blog Supreme.

In part two, I talk with the executive producer, John Comerford.

On the All Songs Considered blog I wrote a quick bit about a new Beck project, where he and bunch of musicians and friends will start covering albums in their entirety, starting with the classic The Velvet Underground and Nico. You can read that, and see the first song “Sunday Morning” here.

Since I heard Beck cover this song, I have been revisiting this album, and even learning to play “Sunday Morning.” It’s such a great simple pop song. Check out this cool, rare footage video of an early version of the song:

UPDATE 6/26: Beck has posted the second song from The Velvet Underground and Nico, “Waiting For My Man:”

Wrote another piece for the NPR jazz blog, A Blog Supreme today (well I wrote a few weeks back, but finally published for the fans).

This week, a look at Fiona Apple’s glorious cover the Cy Coleman-by way of- Frank Sinatra standard “Why Try To Change Me Now.” Read that piece here.

So I am now one of many NPR Music dudes now writing for NPR’s new jazz blog A Blog Supreme. As such, here is my first post, about a recent show in San Francisco where pianist Brad Mehldau and drummer Matt Chamberlain performed music from the grunge era. Read on here.

While doing some research today on the new Bill Frisell\Matt Chamberlain project Floratone (more on that in a few days perhaps), I came across this video on Chamberlain’s MySpace page under his ‘influences.’ At first I thought it was a straight forward old Western film, until the gunman turn out to be none other than drummer Elvin Jones.

The apparently very surreal gunslinger film, called Zachariah was released in 1971 and featured the Jones as ‘Job Cain.’ While made in the early ’70s, it certainly seems to hearken back to the 50’s style hokey Western genre, starring mostly no-name actors. Well, except for Dick Van Patten who played a character named ‘The Dude.’ All I can say is that I’m amazed that jazz-funk and explosive drum solos even co-existed in the days of the Wild West.

One additional random thought… What’s the story on the 1950’s pop cultural love and goofy nostalgia for all things Western? Was there a reason it reached such a pinnacle in this era? Much like jazz, the Western genre has never quite reached the heights of mainstream popularity since those days of Gunsmoke, The Man Who Shot Liberty Valance and all the various Saturday matinÃ©e serials.

Even the imagery of Sonny Rollins’ great album Way Out West jumped on that bandwagon. The album, for those interested, is something of a ‘lesser’ work by the ‘saxophone colossus’ (if you can say that about anything Rollins released) but is still a great jazz record.