A few years ago the fine makers of those delcious energy drinks came out with a product cleverly titled Rockstar. We used to joke in my old band The Missing Trio that if we consumed such a beverage, we would surely become, you know, famous, rich and good looking. Not to mention great musicians like Rod Stewart and James Hetfield who both shill this amazing refreshment. 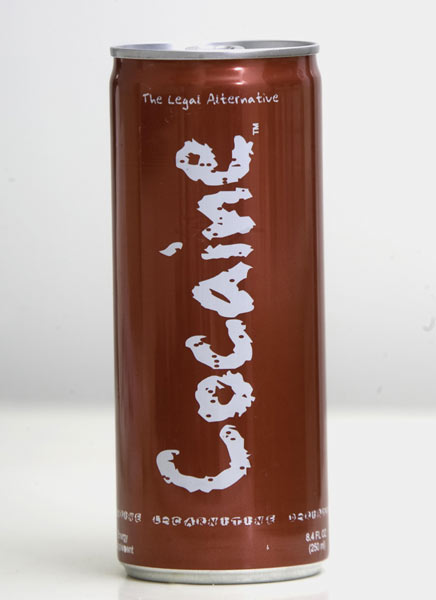 After awhile though, as with any music career, simply being a rockstar might not be enough anymore. First its so great with the endless late nights, the countless ladies, and hard living. But soon you begin to notice your star just doesn’t burn so bright anymore. People get used to your same old tricks and begin to expect something new and shiney.

So like any rockstar who could use a pick-me-up to get through the days, there luckily is a new tasty drink to help with that comeback: it’s called Cocaine. Yes, an energy drink called cocaine. Mothers, get your protest placard magic markers handy. I mean it makes sense, first you are a rockstar, then you are just some coked out shell of your former self holding lead singer auditions on a third rate reality show.

But wait a minute, you might ask. Didn’t Coca-Cola already tread these carbonated waters before? Well, yes. At one point back in the olden days (1885) when people’s concept of medicine was cutting off a leg to cure dysentary (not true), cocaine was used to help fight headaches (true). It was druggist John Stith Pemberton of Columbus, Georgia who invented a ‘cocawine,’ also creatively named ‘Pemberton’s French Wine Coca’ for such purposes.

As Coke grew in popularity over the years, as did the urban myths that embellished Coca-Cola’s famed formula secrecy. People claimed that it still contained cocaine, which would explain the widespread appeal (well that or the large amounts of caffiene). However, despite originally containing uncertain amounts of cocaine, it was in fact reduced over time falling to 1\400th of a grain or 0.16 milligrams per ounce of syrup by 1902 (according to Snopes & Wikipedia) and completely eliminated around 1906 by heightened health regulations.

So while the new Cocaine energy drink is really nothing new but a controversial name and contains no cocaine like in the olden days, it no doubt packs the exorbitant brute strength of way too much caffiene, which last I checked was also addicting. So rockstar, if you are looking for a quick fix to really take you to that next level, you really should try this and BE someone! Nosebleeds reportedly sold separately.