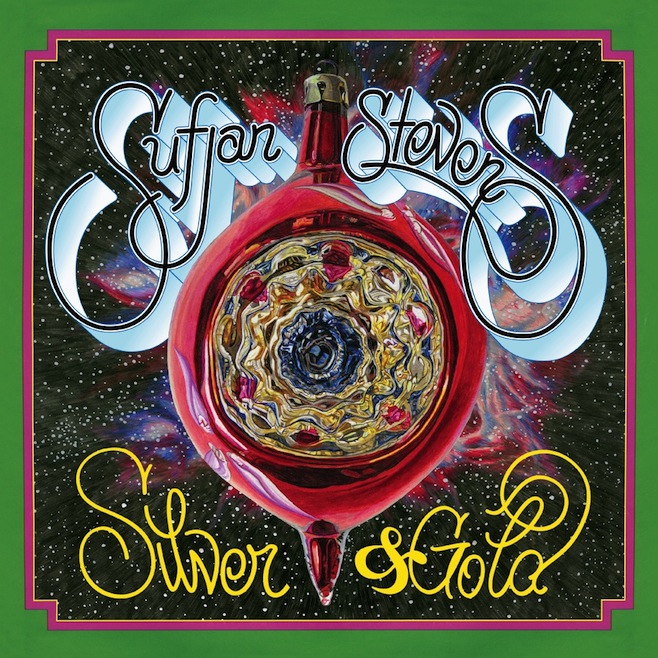 Sufjan Stevens dropped by WNYC to sing “Pleasure Principle” the last acoustic portion of his 25-min long epic “Impossible Soul,” from his even more epic album Age Of Adz. He’s joined here by The National’s Bryce Dessner and two members of his band, including Kat Martino. Sufjan is ending his so-called touring behind this record next week with two big shows at Prospect Park, which is shame because this material deserved more of a showcase on a fuller national tour.

When it first came out last fall, Sufjan Steven’s The Age Of Adz was obviously ambitious. The record was somewhat of a departure from the Stevens’ typical acoustic identity — he traded his banjo and acoustic guitar for synthesizers, computer blips and boops, drum machines, electronic glitched out percussion, 8-bit video game sounds and complicated horn and string arrangements. Everything in the record seems so perfectly placed, every flourish adding something new to hear. It was no more dense than say Illinois; it was simply a different palette he was working with.

Still, there was a ton to unpack in this album and in this age of listening to an album once and deciding what you think instantly, it’s possible people weren’t sure what they were hearing. It was going to take some time to really digest the music, the lyrics and the overall scope of what he was fully going for. Now, nearly ten months later, it’s clear to me that The Age Of Adz is Sufjan Stevens’ best and most vital work.

Here’s what I said at the end of the year, as part of NPR Music’s Best of 2010 coverage:

When Sufjan Stevens released Illinois in 2005, it was easy to believe that the prolific singer-songwriter might actually get around to writing a record for every state. It was a lofty if unlikely project, but it was fun to imagine what places Stevens might tackle next. Instead, for the most part, he fell silent. But Stevens returned in a big way in 2010, releasing an album-length EP (All Delighted People) and following it with The Age Of Adz, on which he eschews many of his musical signatures — the crisp banjo melodies, the sweeping instrumental arrangements, the wispy vocals — for glitchy beats, bit-crunched synths and filtered vocals. Still, as much as the palette has been deconstructed and changed, it’s a sound that’s as dense and ornately orchestrated as ever. As always, at the center of Stevens’ sonic experimentation is his way with melodies and themes that reveal themselves slowly. With so much to process, The Age of Adz works as a bold statement from an artist unafraid to push himself beyond his musical comfort zone.

Sufjan Stevens, “Too Much” from Deborah Johnson, CandyStations on Vimeo.